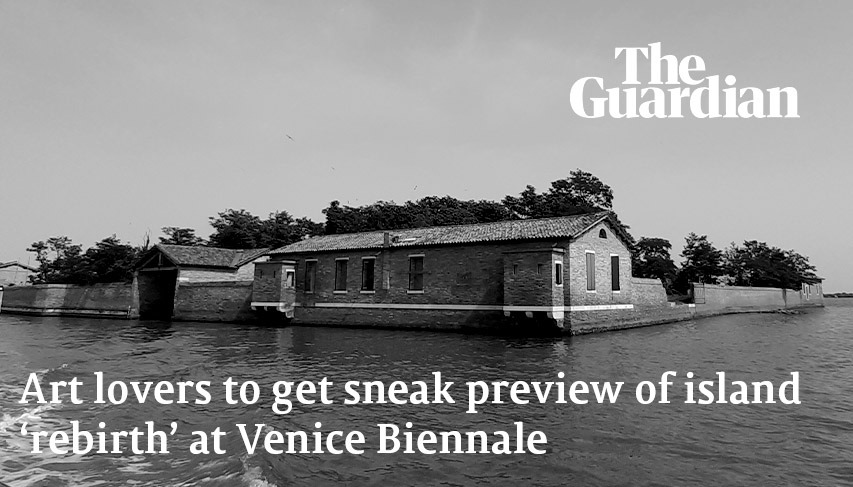 Visitors to the Venice Biennale this week will get a sneak preview of a long-abandoned island in the Venice lagoon that is being transformed into an artistic centre.

San Giacomo in Paludo sits in the north of the lagoon, between Murano and Burano, and first sprung to life in 1046 when Doge Orso Badoer II donated it for the construction of a monastery.

It was then used as a refuge for pilgrims and friars, passing through several monastic orders before briefly serving as a quarantine island in the 15th century. It was eventually handed over to the Franciscans until they were vanquished in 1769.

San Giacomo in Paludo, which is spread over an area of 12,496 sq metres, later served as a military post and a place to store gunpowder before being abandoned in 1961, mostly in ruins.

The island was put up for sale by the Italian state in 2018, on condition that its new owner would use it for cultural purposes. It was eventually bought by the arts collector, Patrizia Sandretto Re Rebaudengo, and her husband, Agostino Re Rebaudengo.

The couple foresee the island being used as a cultural space for exhibitions, concerts, theatrical performances and artists’ residency programmes, as well as providing a base for renewable energy research activities.

“This connection between art and energy is a little bit like a rebirth,” Sandretto told La Stampa. “We like to think that all the layers that make up this tiny islet will re-emerge, with their own character.”

She added: “In some way, this land will return to its origins – it welcomed travellers, and it will do so again.”

Although some of the structures on the island, which can currently only be accessed by private boat, were fairly intact when the couple bought the island, it will be some time before the project reaches its full potential. However, some of the space is ready to host its first event – a show by the Brazilian performance artist, Jota Mombaça – on 21 April, as part of the 2022 Venice Biennale, which officially begins on Saturday. Mombaça’s show will be just a taster before works continue and the island prepares to open, possibly in 2024.

Sandretto said a house for her and her family is also being established on the island but, as per the rules, there will be no hotels.

“We want to spend time there, to live on it, because otherwise we would lose the sense of it,” she said. “We don’t care at all to be all alone in a place far from everything.”

The 59th edition of the Venice Biennale was pushed back from 2021 because of the coronavirus pandemic. The show is being overseen by the Italian curator, Cecilia Alemani, and will run until 27 November.

This article was published on The Guardian on April, 18th 2022